Heat Waves and SEP: who are the most affected? 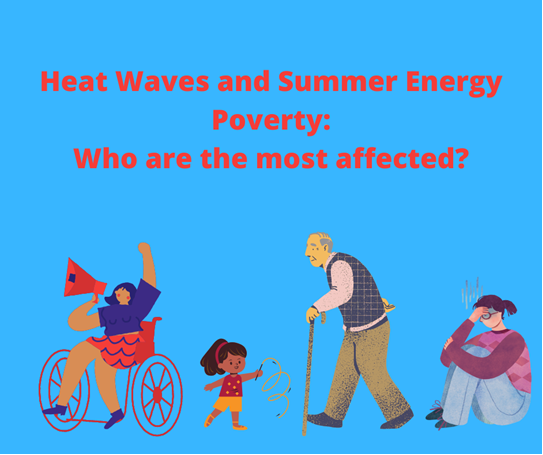 Summer season and its shocking heat waves have finally come to an end for this year, but we need to keep finding suitable solutions to aid the most vulnerable to tackle what seems to be the new normal: a trend of summers characterized by deadly heat waves.

The extreme temperatures do not affect people in the same way, some suffer disproportionately more than others from the effects of rising temperatures. Those more impacted by extreme temperatures and also by summer energy poverty, which is the impossibility to keep the living space cool during hot seasons, are usually the poor and most vulnerable ones.

Not having adequate access to cooling measures, those with lower incomes, migrants, and homeless persons tend to be more impacted by summer energy poverty. Whereas, heat waves can be extremely dangerous for elderly people, children, women, people living with disabilities or conditions that undermine the body’s ability to stay cool, such as diabetes, spinal cord and traumatic brain injuries, and people with mental health conditions, considering that some medications interfere with the body’s ability to regulate its temperature.

Governments and national plans have largely failed to help at-risk people deal with the impacts of global warming. Tackling extreme heat waves and summer energy poverty means proving a multi-actors approach that enables all citizens to feel safe and cool in their homes and cities during summer. Local institutions and organizations can play an important role in this urgent fight: public awareness campaigns, hotlines, free public transport, public cooling shelters, and free water distribution could make a huge and positive impact for all.